There has been a great deal of talk in diet circles about how people eat in France versus the typical American diet. French people seem to eat and drink all sorts of things that are supposed to be bad for you, like butter and lots of wine. Even so, they don't seem to have the obesity problems that are so common in the United States.

Differences Between French and American Diets

The main differences between the American and French diets are related to what people are eating, how they eat it, where they are getting food from, and their general thoughts about and relationships with food.

Quite a few glaring differences exist between an American style of eating and French eating patterns. For example:

The contrast between the French diet and the American diet was first noted many years ago, but it was a 60 Minutes report in the early 1990s that really brought the idea to America's consciousness. The French paradox is related to the idea that French people tend to eat a lot of saturated fat, in the form of butter, cheese and pork, but were thought to not have the rates of heart disease and obesity that other Western nations have.

However, some researchers have questioned the validity of the French paradox. Recent statistics from the French National Nutrition and Health Program suggest that rates of heart problems in France may have been under-reported.

Still, the idea that French people are somehow healthier than Americans, even when they eat a lot of fat, remains. It gained new strength following the publication of French Women Don't Get Fat: The Secret of Eating for Pleasure in 2004.

The book includes many sensible diet tips, such as eating regularly, not depriving yourself of just a bit of your favorite foods, and always having a healthy snack on hand. The lessons are not really specific to the French way of eating, but ideas about enjoying meals may be somewhat cultural.

Another book, The French Diet: Why French Women Don't Get Fat, includes food combining and paying attention to the glycemic index when choosing foods. Again, the diet tips presented are not specific to France, but do provide sound advice for healthy eating.

The American diet on the whole leaves a lot to be desired. Statistia indicates that Americans seem to be eating more meals away from home than ever before. Often, that means stopping at a fast food restaurant a few times a week.

Some fast food restaurants have made improvements in the health quality of their foods in recent years, such as eliminating trans fats from cooking oils, adding some diet-friendly menu choices, and giving options besides French fries as side dishes. However, most fast food meals are not good choices. They are still too high in fat, salt and calories to be a regular part of a healthy diet.

Even when Americans eat at home, they tend to eat a lot of processed food rather than sticking to things that are locally produced, in season, or organic. Larger portions, more carbohydrates and high fructose corn syrup along with a lack of exercise combine to make 69 percent of American adults overweight or obese, according to the U.S. Department of Health and Human Services. Out of that number, 35 percent are obese and 34 percent are overweight. 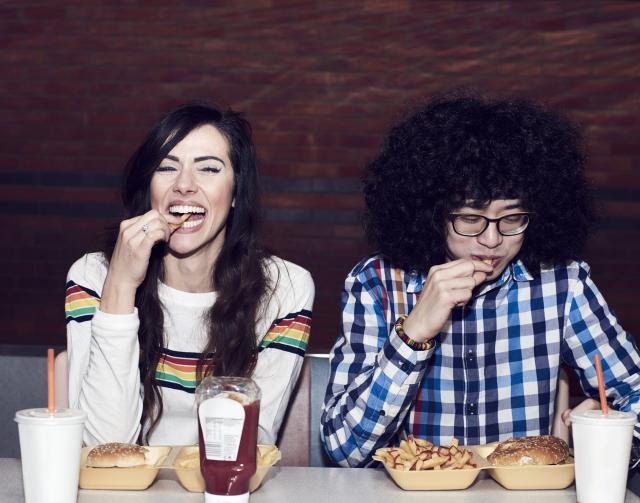 According to the Organisation for Economic Co-operation and Development (OECD), approximately 40 percent of people in France are overweight or obese, which is a lower percentage than in America. Of that number, ten percent are obese and 30 percent are overweight. That is a marked difference, though OECD points out that obesity rates in France "have been increasing steadily" and are expected to go up by another ten percent within a decade.

No nation is without health problems, and statistics suggest France's obesity rate will get closer to (or even catch up with) America's in the future. So, what does this say about choosing a way to eat? No nation has all the answers. Finding the best diet for you may involve some aspects of the French way of dining, like eating regular meals and enjoying wine in moderation when you want it. It can also include aspects of the Asian way of eating, such as consuming more soy and seafood. Perhaps it can even include some aspects of the standard American diet in small portions.

Most people on earth right now could stand to lose a few pounds. No matter what style of eating they choose, those who are most successful will be the ones who cut calories, eat fewer processed foods and get more exercise so they are expending more calories than they are consuming. No matter what nation you come from or what kind of food you like, those are the keys to losing weight and maintaining that weight loss for the long term.