Recently, there's been a lot of buzz about cinnamon and weight loss. Cinnamon may have a number of properties that support a healthy metabolism and stable blood sugar, both of which are important factors affecting weight loss and weight gain. Can incorporating cinnamon into your diet help you lose weight? The answer may surprise you.

Cinnamon is a commonly used spice. It provides a wonderful scent and delicious flavor to a number of baked goods. Cinnamon actually comes from the bark of an evergreen tree grown throughout Asia. It is most commonly used either ground or in small curls of bark known as cinnamon sticks. It has a brownish-red color and a warm and spicy flavor. In the United States, cassia is often sold as cinnamon or baker's cinnamon or mixed with cinnamon. While cassia is the most commonly consumed cinnamon in North America, real cinnamon is actually slightly different. Also known as Ceylon cinnamon, real cinnamon confers a number of health benefits and may be beneficial to weight loss, while there is less of a causal link between cassia cinnamon and weight loss. 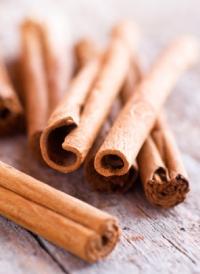 The link between cinnamon and weight loss may be a bit more difficult to establish. Two of the benefits of real cinnamon, thermogenesis and blood sugar regulation, are the two most commonly cited benefits that link cinnamon to potential weight loss.

Many warming spices are believed to be thermogenic, including cinnamon. This is because such spices temporarily elevate body temperature slightly, which causes a slight rise in your body's metabolic rate (the rate at which it burns off calories). While anything that can help your body burn more calories seems like a great way to enhance your diet, it is important to note that in most cases, the effect of cinnamon as a thermogenic agent is slight. Eating cinnamon won't help you burn off thousands more calories a day, but it could elevate your metabolism so that it burns an additional 50 or 60 calories.

It is important that you not overcompensate for the thermogenic effects of cinnamon. Using cinnamon isn't a license to eat more, but it can help you to burn a few more calories than you normally would.

Perhaps the most promising effect that cinnamon may have on weight loss is its effect on blood sugar. In order to understand this effect and how it affects weight loss, one must first look at the overall effect rises and dips in blood sugar have on the human body. Whenever food is eaten, it causes blood sugar to rise. This comes about by the digestive breakdown of the foods that you eat into sugars and nutrients that your body processes and uses for fuel. Certain foods (those high in carbohydrates) breakdown quickly into sugars, causing a rapid rise in blood sugar. When your blood sugar rises rapidly, your body releases insulin in order to neutralize the effects of the sugar. Insulin's primary effect on the body is to escort glucose into the cells to be stored for future use.

Insulin plays a critical role in a healthy functioning body. However, insulin needs to be present in controlled amounts. When blood sugar spikes, the result is often an overreaction by the body of throwing as much insulin at the blood sugar as it possibly can. This can lead to excess fat storage and inefficient use of nutrients.

That's where cinnamon comes in. Studies have shown that cinnamon can reduce blood sugar levels, and having reduced blood sugar levels may lead to lowered amounts of insulin in the body. Due to the reasons outlined above, this may help you store less of the food you eat as fat and use it more efficiently in your body's metabolic processes.

The recommended dosage of cinnamon for health benefits is ½ teaspoon of real cinnamon per day. Chances are, however, that you won't find real cinnamon in a grocery store, nor does it come cheaply. Many health food stores carry real cinnamon in capsule form, and there are a number of spice dealers and specialty stores that sell real cinnamon. Read labels carefully and know what it is you are purchasing.

Real cinnamon may have beneficial effects on your overall health, and there is some evidence that it can support healthy weight loss. As with any other supplement, always check with your health care provider before embarking on a supplementation regimen.