Thanksgiving is a holiday full of family, friends, football, fun, and, most importantly, food. Some foods are obviously high in calories, such as your typical pies served with ice cream and a side of Port wine. But others are deviously full of unnecessary calories that could easily be avoided with a few small tips and tricks. 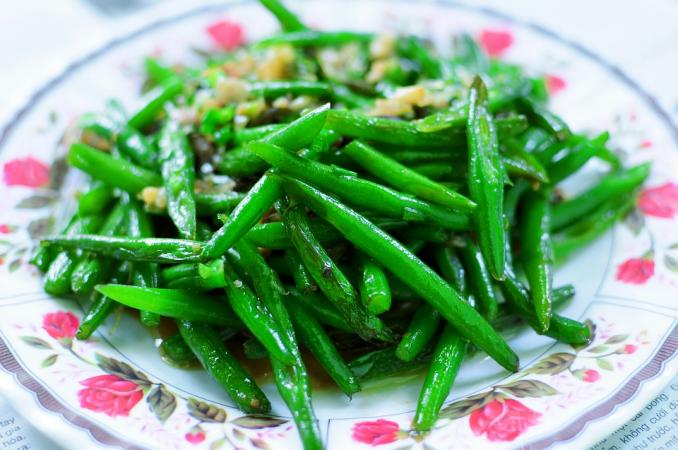 Considering the main ingredient is a vegetable, it seems like it should be a pretty healthy side dish, right? Well, not exactly. According to Greatist.com, the average 1 cup serving of green bean casserole has 142 calories and 8 grams of fat! Green beans themselves only have about 30 calories per cup, so, obviously, a lot of other ingredients are getting added to make this densely caloric!

All recipes call for the basics: French-cut style green beans, cream of mushroom soup, and a topping of deep-fried onions. Obvi, adding cream and deep-fried anything is going to ring up the calorie numbers.

Further, some recipes suggest adding cheddar cheese, but MyFitnessPal notes that 1/4 cup of cheddar cheese adds 110 calories-and many recipes call for two to three cups, a staggering amount of calories. Others suggest also adding a cup of sour cream for a shocking 445 calories! To compare, a slice of pumpkin pie only has about 320 calories, so, for the amount of calories you're spending here, wouldn't you rather have a dessert?

If you must have your green bean casserole on the Thanksgiving dinner table, you can decrease the calories by doing the following.

For starters, ditch the often suggested 1/3 stick of butter used to sauté fresh mushrooms and onions. That can add an additional 250 calories. Instead, sauté them in a fat-free butter flavored spray, such as Pam spray (or your local store's brand of spray). Even without the onions and mushrooms, this is still a great Thanksgiving side dish, so don't be afraid to get rid of those too. Add one to two cans of low-fat cream of mushroom soup (or make your own mushroom saucer per this recipe) and about one half of a can of water per can of soup.

Top with just the lightest sprinkle of fried onions (they're not the healthiest, but they are essential and delicious) and bake at 425 degrees until everything is warm and browned. With these reductions and the omission of butter, sour cream, or cheese, you can still enjoy your green bean casserole without having to unbutton your pants post-dinner. 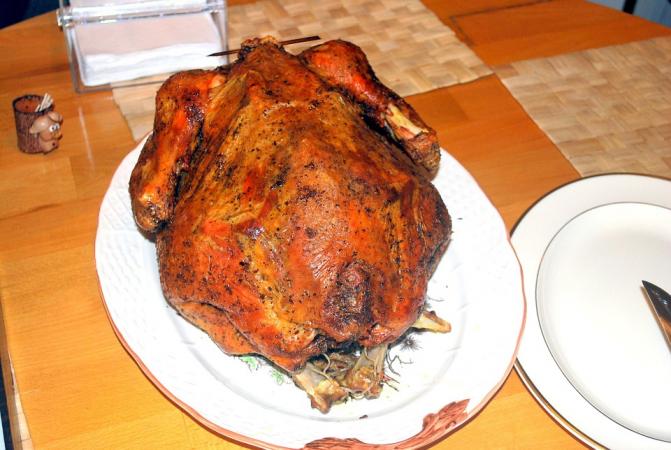 Every movie and TV show with a Thanksgiving scene always depicts somebody (most often the matriarch of the family) pulling a beautifully roasted turkey from the oven and then setting it down on her perfectly styled table for her family to eat. However, whether your typical turkey dinner is healthy or not really depends on what part of the bird you eat. According to Shape, dark meat rings in at 183 calories and is more dense in calories than white meat (which averages about 158). Those totals are all without the skin, which adds another 25+ calories to the portion if you choose to eat it. If you score a turkey wing, then expect for the calorie counts to go even higher to 184 (no skin) or 256 (with it).

Despite some of the horror stories of flash fires and hazards of plunging a large turkey into boiling oil, deep frying turkey has become a Thanksgiving trend over the past few years. People buy special deep fryers or fill large stock pots with oil and fry their turkeys. The benefit? It's much faster than traditional oven roasting (which often takes 20-30 minutes). The downsides? Aside from the potential dangers of overflowing oil fires or the difficulties of removing a large turkey from hot oil, frying your turkey adds approximately 100 calories per average (4 ounce) serving. CalorieKing.com notes that typical portion of roasted turkey with (sorry, everyone) no skin is 153 calories.

Sorry, but there's no way to deep fry a bird and make it low-cal. Instead, opt to roast your turkey just like mom did when you were a kid. Those extra 100 or so calories from frying will really add up when you consider most people go back for seconds (or thirds) - and make sandwiches with the leftovers - so skip the deep fryer all together. Nobody wants to start a fire and end up an accidental YouTube star on Thanksgiving, anyway! If you are cooking your turkey the more traditional way, then remove the skin before consuming to save at least 100 calories per serving.

What's Thanksgiving without a slice of traditional pumpkin pie at the end for dessert? While most people are aware that anything comprised of mainly sugar and pastry dough probably isn't low in calories, you may still be surprised that a single slice registers at about 316 calories for a decent size (a 1/8th of the whole pie) piece, even though pumpkin isn't super-sweet. Many people don't just stop at one slice of pie, either, especially if there are different flavors of desserts to try. Who can resist the siren call of a cheesecake, blueberry pie or an apple crumble?

To make your pie lighter in calories while still tasting scrumptious, you can simply roll your pie crust out thinner. According to SkinnyTaste.com, using just 5 ounces of dough instead of the usual 7 that come in a standard Pillsbury crust sheet will lower your calorie count to roughly 172 calories. 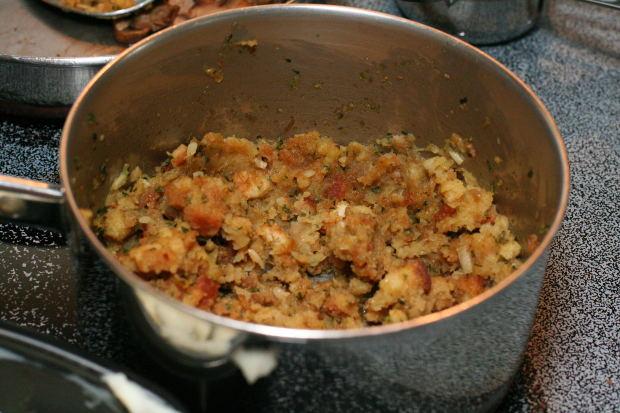 We all know this isn't the healthiest dish on the menu, but nobody wants to celebrate Thanksgiving without some stuffing. More than anything, it's what we add to it that makes it unhealthy. Again, we're sautéing onions and celery in butter-often as much as 1/2 stick of it. (This means we're starting with approximately 400 calories - all fat - and we haven't even added anything else yet!) Many recipes call for a pound of sausage or bacon, which come in at around 900 and 700 calories, respectively, per MyFitnessPal. Whoah. Add in the bread for the stuffing, and this becomes a whopper of a side dish! Further, if you elect to stuff your turkey, you'll be tacking on some additional calories, as this mixture will absorb some of the fat from the turkey that would otherwise drip off into the pan.

There's no need to be scared of stuffing, even if you're watching your waistline. Ditch the sausage and bacon-or use less, as they're flavorful meats and a pound of each can be overwhelming. When sautéing your vegetables, add a tablespoon of butter and keep adding turkey or chicken stock to the vegetables. If you are using some sausage or bacon, put them in the pan before the vegetables and forget the butter altogether-once you render some of the fat from the meats, you won't miss the butter, and your onions and celery will soften and brown just as well. After mixing all of your ingredients together, put them in a separate pan and bake the stuffing while simultaneously baking the turkey. You've now cut many calories from the meal and will feel better about that second helping of stuffing... and feel free to add a little to your turkey sandwiches. (Yum.)

There's nothing that revs up our appetite and makes our lips smack in anticipation more than a mountain high pile of fluffy mashed potatoes topped with a generous amount of gravy. And, on Thanksgiving, this side dish is a must, as it pairs oh-so-delightfully with turkey. However, when you take super-starchy potatoes and add in whole milk and butter and then add some delicious gravy made from turkey drippings and flour on top, it can all add up to a whopping 443 calories (237 for the mashed potatoes and 206 for the gravy). Talk about a mountain of calories!

For starters, swap out the butter and whole milk in your potatoes for reduced-fat butter and 1% milk. Or you can also experiment with reduced-fat sour cream or cottage cheese as the milk replacement. For lower calorie gravy, try this recipe from Skinny Kitchen, which calls for low-sodium broth, water, and skinless cooked turkey, and is a mere 36 calories or 1 Weight Watchers point!

At the end of the day, let's be honest...we're all going to overeat on Thanksgiving. It's what we do. If you're trying to watch your weight, one day isn't going to make you fat; no more so than one day of eating nothing but cottage cheese and celery will make you thin overnight. (Don't we all wish, though?) Just watch yourself when it comes to appetizers, cut a little here and there from traditional recipes, and forgive yourself for those two slices of pie that you wouldn't normally eat. And most importantly, be thankful that you're able to eat a meal like that in the first place and share a day with the people you love most before heading to the mall for all those big Christmas sales. (A good reason to eat light - you'll be faster getting around the mall than the person who had their deep fried turkey and ate half the bowl of mashed potatoes!)