Adele lost over 20 pounds between the birth of her son in 2012 and comeback in 2015. The songstress, her dietician, and her trainer all revealed how she did it.

A key component of Adele's weight loss were the changes in her dietary habits. She told Rolling Stone that she:

All three of these diet tips can aide weight loss for someone who needs to lose a few pounds.

As a busy singer and mother, Adele has been a client of The Pure Package meal services. Belfast Telegraph reports that owner Jennifer Irvine told Heat magazine about the service she provided to Adele, notably:

Irvine also mentioned that the famous songstress wanted to remove processed foods from her meals and life.

Adele reportedly followed The Sirtfood Diet that was recommended by her trainer Pete Geracimo. You can find the basic principles in a diet book of the same name; it focuses on foods that are high in sirtuin and it includes several special green juices. Reportedly, her trainer puts all his clients on this diet. However, Adele has not confirmed the use of this particular diet.

In addition to making dietary changes, Adele also stopped smoking, which promotes overall health. Adele told Vogue that the reason she wanted to shed the weight was because she was looking for stamina prior to her upcoming tour. 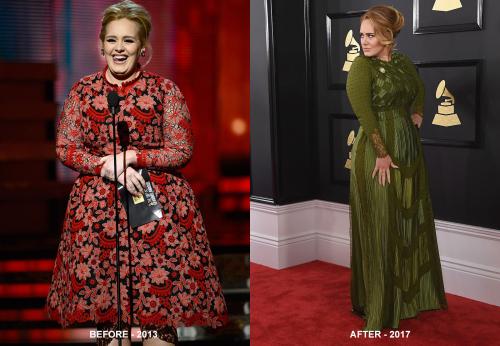 Adele visits the gym frequently, even though she doesn't enjoy it. She admits to Rolling Stone that she noticed the attention Chris Pratt received after he got fit. Belfast Telegraph reports that her trainer plans workouts based on weights and circuit training. Geracimo called the program a "Modified Strongman Workout." He mentions that she uses cable machines at the gym to stay in shape.

Adele has undergone a dramatic transformation over time. Her weight loss highlights the benefits of combining diet and exercise. Try incorporating some of her secrets into your own lifestyle and see how you look and feel!